I finally bit the bullet and finally finished February’s blanket. I couldn’t have March’s blanket done first now. That just wouldn’t be right.

This blanket was crocheted in mini c2c. I used Red Heart Super Saver yarn. Each small square takes about 4 hours if you don’t have interruptions like children or a dog. I have both. The large square is equal to 4 small squares. So it should take 16 hours. I wish! It took a bit longer. Finishing the Hogwarts crest felt like a big accomplishment.

This is the blanket that started my quest to make twelve blankets in twelve months. I saw the pattern on www.twoheartscrochet.com and fell in love. If you’d like to make your own Harry Potter blanket, go visit their wonderful website.

I love how the blanket came out. It will be hard not to drag it with me to Florida and take pictures with it all over Diagon Alley and Hogsmeade at Universal Studios and Islands of Adventure on my next trip. I could get the coolest pictures on the Hogwarts Express.

My husband was awesome and spent yesterday weaving in tails I missed. I’d also like to thank the baristas at my local Starbucks for being so encouraging. They have been so excited to see my progress on this blanket and kept me supplied with caffeine to keep working.

I broke down and finally finished the last square for February’s blanket. I’ll assemble it tomorrow. I figured that I should probably finish February before March and I’m almost done with March.

(I just have to crochet the banner and attach it to March. I’ve already assembled everything else on March.)
Something about this square took what felt like forever.

The pattern for February’s Harry Potter blanket is available at www.twoheartscrochet.com.

I wonder how I should celebrate finishing my second Harry Potter themed blanket. I think I’ll celebrate by going to Diagon Alley and Hogsmeade and get myself a butterbeer.

Life has been a bit busy lately so there was a bit of a delay for my Valentine’s Day celebration post.

For our centerpiece I used the two Valentine’s gift bags that I put together for the two children still living in my house. If you can have baskets for Easter, why not gift bags for Valentine’s Day? Plus it gave me a chance to spoil them with gifts other than heart shaped boxes of candy that they don’t particularly like.

For our meal I made one of my husband’s favorites; flank steak on garlic toast.

For dessert I decided to make something special and Harry Potter themed. I created a bread pudding with a Firewhisky sauce. Everyone enjoyed that so much that I’ve already had to make it again since Valentine’s Day! My bread pudding recipe was raisin free by request of my family but if you decide to make it, feel free to add raisins or dried cherries. 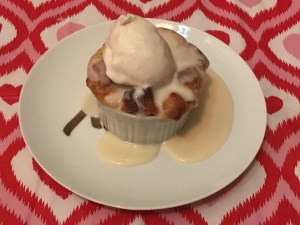 Our friend Melissa went with us last November when we went to Universal Studios, Orlando. One of the things she bought for herself was Dark Mark tattoos. That’s when I found out that the Death Eaters are some of her favorite characters in Harry Potter.

My husband, kids, niece, sister and brother in law, my parents, myself, etc all have house scarves from Harry Potter. My friend Suzy made most of them.

This was before I had realized that I could crochet. At the last minute we needed 5 more scarves. My friend was already scarfed out so I figured I might as well try my hand at crocheting. I texted my friend asking her what stitch she used, what size hook, and what yarn colors we had chosen. I went online and taught myself Tunisian simple stitch. My friend and travel buddy doesn’t have a Harry Potter scarf though! I asked her which house scarf she needed. She wanted Slytherin but won’t wear green. Hm…what was I to do? I decided to make her a Death Eater scarf instead!

I started by picking out yarn colors. I couldn’t do the dark mark in green because she really doesn’t like green. White seemed like a bad idea. So black and grey it was. Next I made up a graph of the pattern. If you are interested in how I made a Dark Mark scarf, here is the pattern.

Tonight we celebrated Harry Potter style. We were celebrating the completion of the Ravenclaw blanket. It was also an excuse to use our owl plates. Who doesn’t love an owl plate? 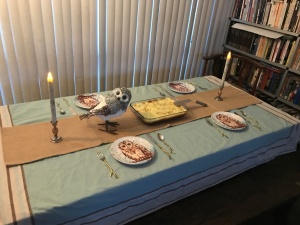 We dined on Shepherd’s Pie and enjoyed Pumpkin Juice Smoothies. The smoothies were inspired by the pumpkin juice I drank during my last visit to Hogsmeade (Orlando). 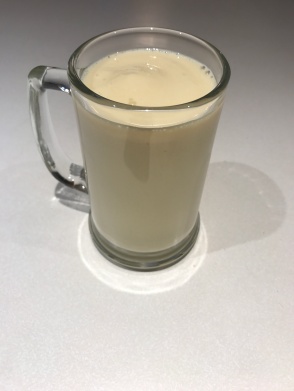 I’m going to be crocheting twelve blankets in the next twelve months. Coincidentally I have twelve people in my life that I need holiday gifts for. I started a little bit late. My first blanket was started in mid January. I finished it February 2.